Extreme E, the revolutionary electric off-road racing series, has outlined the race format for its five-event adventure to some of the most formidable, remote and spectacular locations across the globe, starting early 2021.

The series has devised an innovative format unlike any other, likened to a Star Wars Pod Racing meets Dakar Rally, which is designed to break the mould in motorsport with all-action, short, sharp wheel-to-wheel racing, world-class drivers and teams, the cutting-edge ODYSSEY 21 electric SUV and its stunning, formidable environments, all firmly in focus. 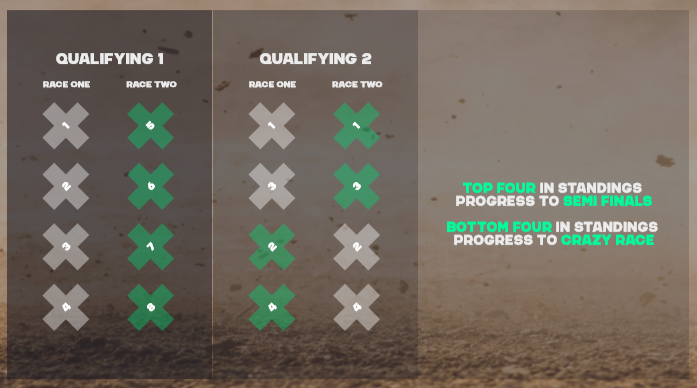 Each race, which will be known as an X Prix, will incorporate two laps over a distance of approximately 16 kilometres. Four teams, with two drivers – one male, one female – completing a lap apiece in-car, will race head-to-head in each race over the two-day event.

Qualifying takes place on day one to determine the top four runners who will progress through into Semi-Final 1 and the bottom four competitors who will go on to take part in Semi-Final 2: the unique ‘Crazy Race’.

The Crazy Race will be a tooth-and-nail, all-or-nothing fight, with only the quickest team progressing into the Final, while the top three will make it through from Semi-Final 1. The winner of the Final – the fastest combination of team, drivers, car and engineers over the epic two-day battle – will then be crowned the X Prix Winner.

Another innovative feature is the Hyperdrive. This will award an additional boost of speed to the team who performs the longest jump on the first jump of each race. Hyperdrive power can be used by that team at any point in the race.

This initial format is designed to incorporate eight teams, and can be adapted to accommodate additional entries.

Teams will field one male and one female driver, promoting gender equality and a level playing field amongst competitors. Each driver will complete one lap behind the wheel, with a changeover incorporated into the race format.

The teams will determine which driver goes first to best suit their strategy and driver order selections are made confidentially, with competitors kept in the dark as to other teams’ choices until the cars reach the start-line. Contests between males and females will therefore be ensured.

X Prix circuits will also incorportate natural challenges that will leave viewers at the edge of their seats, and drivers and teams will be pushed right to the limits of their abilities; with hazards to navigate and defeat such as extreme gradients, jumps, banks, berms, pits, dunes and water splashes.

Alejandro Agag, Extreme E Founder and CEO, said: “Extreme E is a championship like nothing else that has come before in sport. Its goal and objective is to accelerate innovation and tackle climate change head on using transportation.

“Creating this innovative sporting format, which we’re likening to Star Wars Pod Racing meets Dakar Rally, is vital in order to engage the next generation of motorsport fans. We hope our fans will enjoy the short, sharp, wheel-to-wheel racing this format has been built around, and with our high performance electric vehicle, driver changeover, the Hyperdrive feature, and the Crazy Race qualification format, there is plenty to watch out for, and many chances for positions to change hands, Our races really will go right to the wire.”

Extreme E’s cutting-edge 550-horsepower, ODYSSEY 21, incorporates a number of innovations to enable it to cope with all the rigours of racing over the toughest terrain, where no car has raced before. The battery-electric, 400kw (550hp), 1650-kilogram, 2.3-metre wide E-SUV is bespoke from the ground up. Capable of firing from 0-62mph in 4.5 seconds, at gradients of up to 130 percent.

It is made up of a common package of standardised parts, manufactured by Spark Racing Technology with a battery produced by Williams Advanced Engineering. This encompasses a niobium-reinforced steel alloy tubular frame, as well as crash structure and roll cage, whilst tyres, for both extreme winter and summer requirements, supplied by founding partner Continental Tyres.

As well as being used as platform for equality and illutstrating the capabilities of electric vehicle technology, Extreme E will highlight the impact that climate change is having on its remote race locations, using a committee of leading scientists to help bring global attention to issues such as deforestation in Brazil, rising sea levels along the West African coastline, melting Arctic icecaps in Greenland, and more.

The championship will announce further drivers, teams and partners over the coming weeks as it builds towards its early 2021 start-date apace.

A full breakdown of the format including championship points can be found here.